Jason and I spent the weekend in Madison at my oldest sister's house and enjoyed their new hot tub. It was the best. Here is the view from said hot tub if you put your head back. 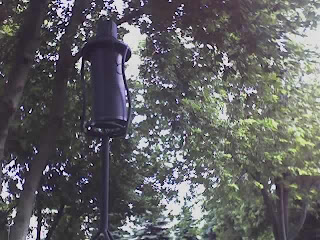 Plus it was just a really wonderful visit with my sisters and brother in law and nephew and parents and Jason. It's been a long time since he's been able to join me on a weekend trip. I told him how glad I was to have him there because when I go by myself I have a great time, but am always a little homesick for him. My dad gave him his old GPS system for the car so we took an "alternate route" home. It took us through old timey Stoughton, WI so Jason found a radio station that was playing music from the 30's. It was hilarious.

Speaking of being homesick for Jason, I leave tomorrow at the butt-crack of dawn for NYC for work. I'll be there for four days so I'll miss J and the cats but at least I'll have Eva with me. We are both really excited to enjoy that city. I have been there a bunch but always get super excited stomach when I get to go back.

Before I "start spreading the news" I have two more pics from the weekend to hold you over until I get back.

This is Smokey (my sister's cat)squishing out of a laundry basket. 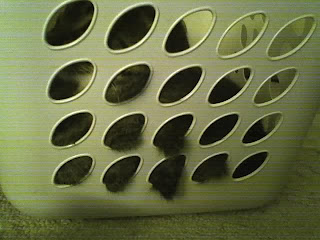 We picked Fred up on our way back into the city and we all went for lunch. We challenged Fred to create a gourmet looking plate with his dips and pita. Not bad for a first try! He was allowed to use anything on the table. The vinegar on the tomato didn't turn out how he'd hoped but none the less...pretty gourmet. Or almost.

He calls this piece "The Perfect Bite". 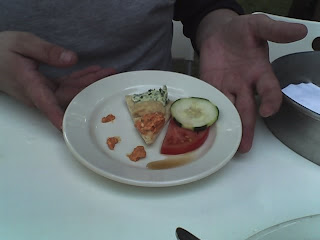 Posted by Crescent at 2:22 PM No comments:

All You Can Eat Shrimp Saves the Day!

Jason had an off day yesterday too so we decided to go eat at Glen's Diner on Montrose. We get there and it's ALL YOU CAN EAT PEEL AND EAT SHRIMP DAY!!!! It turned it around for us. We started having the best time ever. Laughing hysterically at pretty much everything. Eating plate after plate of garlic shrimp and then finally made the brave decision to try the spicy Cajun shrimp. I had about two before it felt like my lips were going to fry off. But Jason persevered and truly ate all he could eat.

Here he is with his FingerBowl brand wet wipes and a mouth on fire. I told him to make a spicy face. 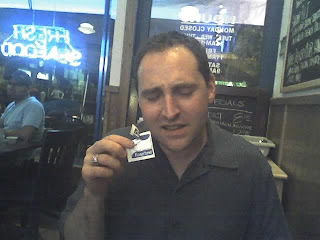 And here is our table looking like war torn Kosovo at the end of the meal. 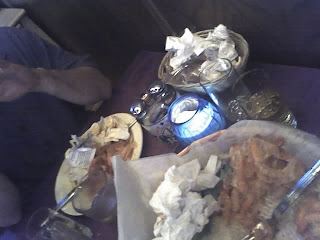 My point is we had a really fun night and sometimes that's all you need to get out of a funk. At least it works for Jason and me.

Oh and I ended up having SO much fun that I left my purse on the chair and didn't realize it until I was trying to head out to work this morning. I had to work from home until they opened up at 11 this morning. But it was a nice little turn of events because I had the most relaxing morning and a nice walk and an empty air conditioned train ride into work....I really can't complain. THERE's something new!!! Ahhh...I think that means my whiny week has come to a close and I'm back to my normal "life is good" self.

Have a great weekend!!!

Posted by Crescent at 1:09 PM No comments:

I don't know if it was that special on the Mayan doomsday calendar that I watched the other night (FYI we are all done for December of 2012 so....you know get your affairs in order and stuff) or if it's really early PMS but I am just so.....ugh or blah or wahhhh or something. Feeling sorry for myself about nothing which annoys the piss out of me. I hate that quality in others and hate it even more when it sneaks up on me about twice a year. Everything is great and fine and good but something is just off inside me this week. I think the main issue is that I have no idea how to be what I want to be. Or maybe I'm not sure what that is yet or something. I want to write but I also want enough money to get a couch and some rugs. These seem like small things but they are indicative of bigger struggles inside I think. I kind of just don't want to be an assistant anymore. But I'm really good at it so here I sit...broken hearted...came to be a famous blogger but only farted. hahahahaha.....that kind of just cheered me up. Fart jokes...is there ANYTHING they CAN'T do?

My good friend and co-worker, Eva, has been in the same boat kind of this week so that's actually been a great help. Yesterday one of the printers was beeping over and over and over and we had this exchange:

Eva - "Hey Guy, you're a doctor, right?"
Me (aka Guy) - "Not certified but yes. What's up?"
Eva - "Is there a disorder or illness that makes you want to kill someone when you hear repetitive loud noises?.....Or is that just mild depression?"

It cracked me up for a good hour. We decided it was the latter.

BUT I had a great time last night at Jason's softball game and have nothing to do tonight except relax and drink some wine on the porch so I'll snap out of it.

AND the guy next to me has the funniest sneeze ever. It sounds so angry. It rules.

PLUS it's Retro Music Video Thursday in my dept. and I won! The objective is to blow each other's minds with an old video from our childhoods. Here was my pick, which was just announced as the winner!

Here was the runner up which is also pretty rad:

and the bronze goes to:


All delightful memories. Okay I feel a lot better now.
Posted by Crescent at 12:58 PM 2 comments:

I hate mememememe's or whatever they are called. The name itself makes me feel car sick. But I'm also in a crappy mood so I'm extra negativo today.

Okay so Biddle asked me to do this meme and he is a friend so I'll comply.

8 things about your childhood that people don't know or something.

1. I never sucked my thumb or used a pacifier.
2. I cried whenever my Dad would talk about his travels because I pictured him alone and it bothered me. He was fine with it but one mention of him eating dinner and I would say..."Who did you have dinner with?" and he'd say "Nobody" and then I'd bawl my head off and they'd have to explain to me that he wasn't lonely on those trips. It made me mad at his job.
3. I was in a local runway show for O'shkoshbygosh which ended up being my first leg shave day as well.
4. I think I hold the national record for most goose eggs on my head in one season. I could list them all but I'm not going to. Just know they all were from me thinking I could do something I could not do. Result....giant goose egg.
5. I started up a protection service where I would walk home the smaller boys that had bully problems. I was bigger so the bullies left me alone and the wee boys got home safely. I did this free of charge but a lot of the guys would give me homemade cards or donuts as thanks.
6. The first time I tried a shrimp cocktail all the shrimp were totally uncooked but I didn't know they weren't supposed to be gray and didn't want to bother anyone so I ate two before anyone at the table noticed. They sent it back and I tried again that same night with cooked shrimp and have loved them ever since.
7. I drank half a bottle of Joy dish washing soap once. Nothing really happened except I got in a little trouble. And maybe my insides were streak free and spotless.
8. I had a giant birthday party for my favorite stuffed bear, Oliver, every fall when the first really windy day happened (that was how I knew it was his b-day for some weird reason). Like the kind where the wind actually howls. My parents let me take over the living room on those days and take the couches and chair cushions to make the party room.

Okay now I have to "tag" 8 people.
I tag:
Howard Jones
Whitney Houston
That's So Raven
Totaro
the entire 79 Chicago Cubs (counts as one)
that annoying girl from the Welch's commercials
Shakira
the cycles from CHiPs
Posted by Crescent at 3:17 PM No comments: 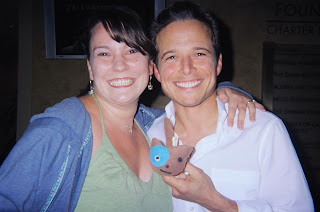 I am not sure I've ever EVER taken such a bad picture but I was very very excited. Tracey the cat looks great though. In spite of her illness she's very photogenic. God. I can hardly even look at this picture....I look so very...special. I always flip my lid over celebs but Party of Five was like my everything during college and Bailey was my main man. PLUS after this picture was taken we all went out and he and his wife are so sweet and real and smart and great. I know I've said that already but, again, I'm a little excitable ever since that trip.

man. I'm obsessing about the badness again. The thing that really blows is the fact that I looked super cute that night and had just discovered via a friend's scale that I've lost 15 lbs. BUT I was all freaked out and it was freezing in L.A. so I had to wear my gross sweatshirt over my cute shirt and if I just had remembered how giant my face looks when I smile that big I would've held back a little.....dammit. I am reverse vain or something. I'll try and let it go in 3......2.....1. Done.

Have a good weekend little ones!