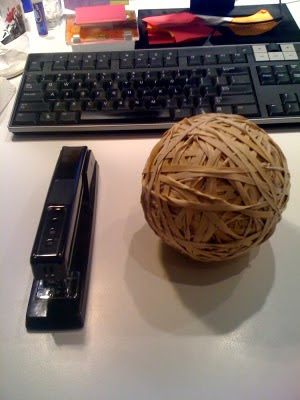 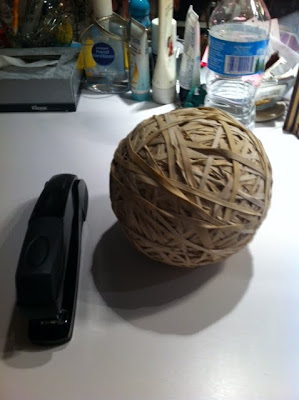 
Huh. it doesn't look that much bigger but it has to be, right?
Posted by Crescent at 4:10 PM No comments:

Taking Back the Nacht

Jason freaked out again last night when I came back into the room after a 2am water break. This one was the loudest most afraid I've seen him yet. All of his limbs flew up in the air at the same time and he made this super deep and terrified "UHHHHAA" sound. Then he said "Croissant....why do you DO that!" What?? Walk back into my room after some water? (Truth: Diet 7UP out of the bottle). Also, it's not like I dress up for bed or anything but it's also not like I put on white zombie make-up, giant monster hands and a fright wig. Although my shirt did say CANCUN FIESTA AMERICANA! which could be taken as a threat, I suppose.

In other nocturnal news I'm finally trying to get a hold of my insomnia/anxiety problem. It's a long story as to how I got there but I'm seeing a psychologist that specializes in the wrecked nerves (I still say nu-ewvs like a Bugs Bunny just because it's more fun) that occur during and after the cancer funtimes.

Mostly just because I need to get some sleep. For some reason night has always been a less than optimal time for my heart and head. I remember as a child seeing that first hint of morning light and thinking "In a few short hours I will have some company!" Then I would listen with every ear muscle I had for any sign of my family waking up.

So sleep has never really been my thang. I love it! Don't get it twisted, holmes. Sleep rules the school. I just am not great at it. Add to that a crippling fear that everyone I love is going to get sick the next day, including me (that's right...I love me too) and you've got yourself some eye bags that would go PERFECTLY with Paris Hilton's new pink hoodie-dress.

I also want to get totally off of any sleep aids. They make my stomach funky and my head hazy. Plus I like the challenge of being a sleep champion without performance enhancing drugs.

My therapist gave me some great advice and a CD about breathing techniques which I'm now totally obsessed with. I probably will annoy you with what I've learned the next time we meet so maybe prepare a few things to daydream about while I go on and on and on ahead of time. Work on your furrowed brow and interested nodding. You'll thank me later.

She also said to make bedtime a routine in relaxing. So I make tea(I'm going to get a real proper tea kettle today I think), make my bed up nice, brush and floss, take 10 mgs of Melatonin (yes I realize that could be taken as a sleep aid that I just said I wouldn't take but it's like all natural, man. Also it's been found to fight cancer and I like fighting cancer when I am able) then I go to bed and do my breathing work. I gotta tell you. Aside from the night Jason had stomach flu and I was up doing a lot of back rubbing and "sorry I gave this to you"ing, it's working like a charm. I still wake up a couple times but not for long and I'm able to keep the really dark thoughts away by just letting them pass through instead of having them in for a sleep over.

Last night I DID dream that I was in an 80's horror movie where the killer would cut the people in half and then spear their body with their own legs in broad daylight in NYC. Then he'd put them in yellow bags and the bags all would still be moving. But you know...baby steps and all that. Even that dream wasn't ALL horrifying. As I was running away from him I found a really cute candle shop and got some incense I liked.

I'm also down ten full pounds. I feel a little more in control of my emotions as I get more sleep. Go figure. Work is good. I have a new laptop so I've been writing a lot more. Today is good. That's as far as I need to get at a time. When I remember that I high five myself. But then at the last minute I do the psych out hair smooth move to keep myself in check.
Posted by Crescent at 9:10 AM 2 comments: