I Declare Next Week Bravery Week!

So I'm declaring another holiday. Just go with it. I have more power than you know so you best hop on board.

Okay I had a horrible nachtmare about my upcoming "deep teeth and gum cleaning". It was terrible. Some random guy from a dental school was brought in to do it and had no idea how to! I woke up extra nervous about next Tuesday. BUT I decided to declare it Bravery Week and I'm going to do a couple things I've been putting off in honor of the holiday. I figure if I can get through the *shiver* gum scaling I can do a few other things that have been weighing on my mind for...oh the past three years. Nothing major, just some financial stuff I've ignored for too long.

So I encourage you all to join in and do at least ONE thing you've been putting off due to fear or something next week. Let's all celebrate a holiday I made up!!!! If you are so inclined post your brave deed in my comments!
Calaban gives it one leg up!!!! HI YA!!!! 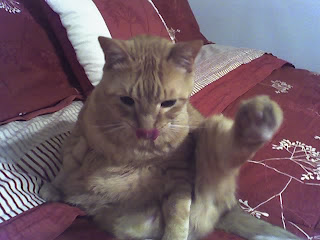 It's Too Bad Jason Hates Beer so Much. 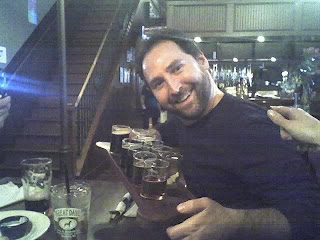 Here is Jason trying the ten beer sampler at The Great Dane in Madison this weekend. We were there for Easter but mostly for my sister's 40th B-day. She was kind of depressed but we still had fun. Also my other sister had to put her cat down the night before we got there so she and her boys (huzz and son) were pretty blue. Understandably. It's been a bad year for cats I know.
But a good year for Jason with a beard pics.
Posted by Crescent at 3:36 PM No comments: 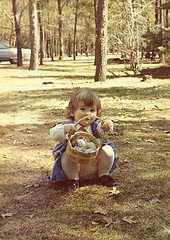 Just kidding. I can deal with this late season blizz because it's winter's swan song. Mark my words.

The man and I are heading up to Wisco this weekend for not only Easter but also for my sister's 40th b-day. Should be a fun weekend of lots of food, drinks and laughing at inappropriate things.

Have a safe and happy weekend everyone!!!!!

"whiz" might be too strong a word, but for my first try at Pub Quiz I think it was okay because.........we won $10! Here is Megan with cerfificate (that's how the guy said it once....too many beers or whatever) before we applied it to our tab. 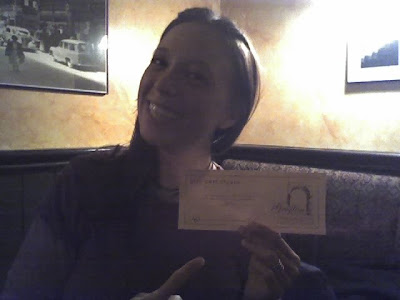 Annnnnd....because I made friends with the guy running it and he gave me this awesome *Harvey Porter/Where Is Waldo scarf that I had been eyeing and wanting all night long!!!! I give this scarf two hammer thumbs up! 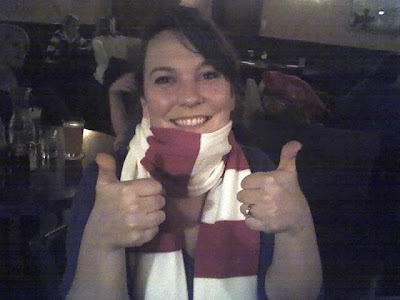 So way to go us. (Tony, Emily & Megan!) Next week we will do much better. I'm still fuming that I forgot where the Sugar Bowl was.


*Harvey Porter is what Jason calls Harry Potter for no good reason.
Posted by Crescent at 2:03 PM 2 comments:

Okay so no cavities!!!! Thanks be! I was really worried about that. BUT I do have to go back in for some horrible "gum scaling" procedure to get all cleaned up. It's a two parter too. I guess they will numb my gums but it's still mildly daunting. I figure as someone who's bit off her own tongue, (by accident not ala Million Dollar Baby), broken her face, ruptured her intestines....etc....etc., I can certainly handle a little....*shiver*....gum...scraping.

So Arizona was amazing. Just beyond the greatness I ever expected. It was so weird and wonderful to visit with those three girls that were such a huge part of my childhood. They've all grown into really smart and strong and fun women and I'm proud to know them and even prouder that we all reconnected. We plan to go every year now!

In other news....dentist. Today is dentist day. I've put it off for so long that I'm like freak out nervous. And today is just the x-rays and exam not even the cleaning yet! I'm so worried that they'll find a cavity because I've never had one and if I have one now I just don't know what.

Plus I know I'm going to hear it about my gums. I just will be so relieved when it's over with. I might even blog about it.

Anyway, here's where I wish I was....were....are...whatever. That water slide really made me happy. 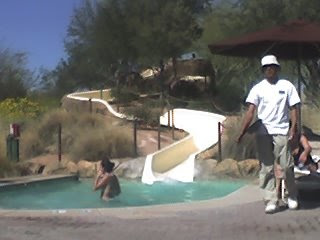 That's not me, but it is my waiter. This is right before I ordered some beer. Sigh.
Posted by Crescent at 2:11 PM No comments:

I leave at the B-crack of dawn tomorrow for my girl's weekend in Phoenix! It's going to be me and three of my best friends from high school. We always talked about one day being married and scattered across the country but then taking this trip together and we are actually doing it! How cool is that!? Answer - very. Very GD cool.

One of said girls left me a voicemail last night saying how she couldn't wait to see me in a mere 42 hours and how excited she was. I usually feel this way but it was one of those moments where I thought, you know I've screwed up a lot but one thing that I've done right is made friends. I have such amazingly amazing friends and to have them really be excited to see me just makes my life because I'm sooooo excited to see them too.

I will report back on Monday with pics and stories I'm sure.

All that you really need to know is that the resort has a 110 foot water slide. Come on. It's like a dream for me.
Posted by Crescent at 12:59 PM No comments: 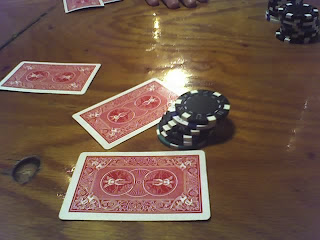 So I learned how to play Sheep's Head last night. It's like Euchre only harder. At least for me. I played it in high school with my boyfriend's parents but anything involving numbers pretty much exits my brain faster than (insert topical joke about someone leaving someplace super fast...yeah I know. I'm lazy today. I'm also cranky so don't mess with the bull or you might get the horns and what not.)

Anyway, Jason was a great teacher and the guys we played with were all super nice and patient with me but the same thing happens that always happens when I play a game like this. I got all sensitive and embarrassed for messing up and ended up yelling at Jason (sort of in a funny way...sort of in a "Why is your wife being so come on?" way). He knows me well enough that he was able to laugh it off thankfully.

However! I really did have fun and want to be good at this stupid game. So I'm going back next week. I'll try to stay calm this time, but man...I'm telling you....there is some weird part of me that gets so worried about being bad at something new that I totally FLIP out and become the opposite of how I want to be. I think it goes back to childhood (doesn't it all?). I would BEG my sisters and/or mom and dad to play a game with me...ANY game but my family isn't really big into games so the rare times they said yes I put all this pressure on myself to be good and for it to be fun for everyone. Inevitably I would do the opposite just by being so keyed up and over invested and after one round everyone would all of a sudden have something pressing to do.

Wow. Speaking of things I'm not good at. You should have just seen the results of my spell check on this post. Yipes.
Posted by Crescent at 1:35 PM No comments:

So get this. I'm actually DOING something. Like with my life sort of. I'm writing a real actual thing and having meetings about it and working with a friend in L.A. on it! I won't go into what it is here because I don't want to jinx anything but the fact that I actually sat down and knocked out two scenes (now you know it's not a cook book) today and sent them to my partner makes me feel so much less like a lazy buttface. I know it might not sound like a lot to those of you who write tons of stuff all the time but you have to realize I write tons of stuff all the time too but never have the nuts to put it out there so this IS a cool big deal for me.

Also, I'm going to learn a new card game tonight at this sheepshead tournament Jason is taking me to. He's been going for a few weeks but he wants me to meet the guys (I think they are mostly old dudes from Wisco) and is going to teach me to play. I predict bad card playing but a fun night.


ALSO I got my new converse sneakers today. I plan to do a lot of sneaking in them so watch your back.

IN CONCLUSION, I'm going to Arizona on Friday!!!!
Posted by Crescent at 3:54 PM No comments: 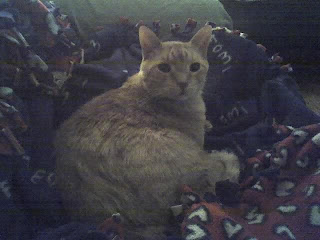 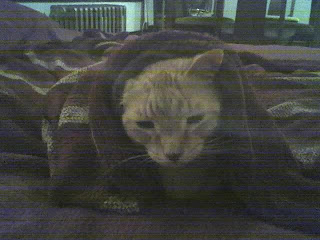 I don't mean like rules for my cat (i.e....Rule 1 - don't pewp on my head...2. don't claw my face...etc.). I mean he rules the world. I love him so much. I was sick for three days and he spent almost every minute either on my lap or on the chair next to me. I'm much better now but would like to make today Calaban Prah Day. Just because he deserves it. OH wait. But it will have to be tomorrow because the world's OTHER cutest being has her first birthday today! A one Miss Elizabeth K. So today is for her and tomorrow is National Calaban Prah Day. 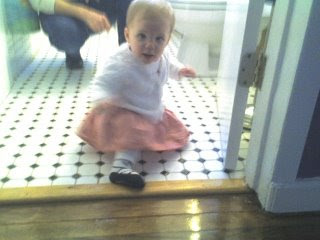