Take a load off, lipgloss! 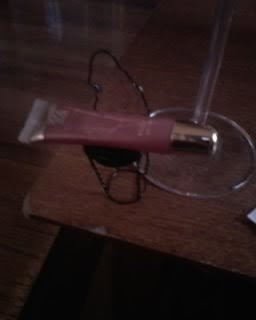 Jason made me a wee chair from a champagne cork top thingy. I didn't have a doll to put in it so I let my lip gloss have it. Look how comfortable she is!

Posted by Crescent at 2:24 PM No comments:

This is why I can't have nice things.... 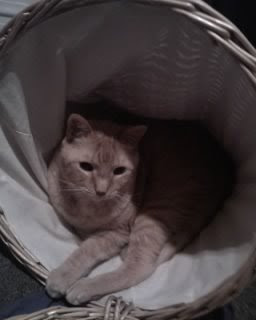 My sister gave me this slightly used hamper on Saturday. By Tuesday night it belonged to Calaban. 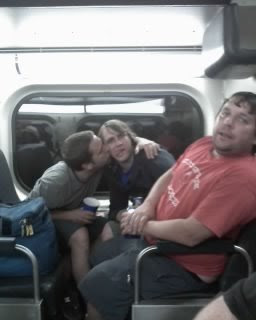 Friday night I went to Willie Nelson at Rivenia with Jason's crazy but fun co-workers/friends. We drank amazing wine and were pretty obnoxious on the train ride back to the city, as you can see. (Jason and Crescent not pictured.....we were on the other side of the aisle)
Saturday we got up super early and went to Jason's softball game and then right from there to Madison for a delayed Father's Day. I would like to be back on the road looking at this exact sky again. The ipod was playing the jams and besides Jason almost falling asleep at the wheel it was a lovely drive. 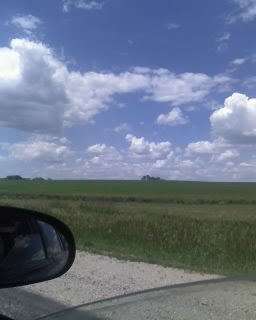 Once we got to my sister's Jason and my brother-in-law went to play golf. When they came back we all had a giant rib dinner. Jason tried the sauce called Devil's Spit which grosses me out for some reason. Maybe because it's called SPIT!?? Sick. 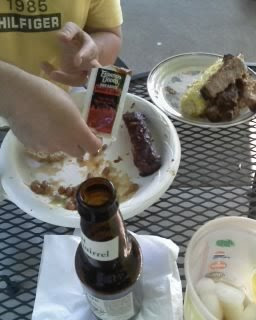 Then Sunday we had the Katzfeys over for an afternoon bbq and tried not to get rained on but did anyway.
Elizabeth practiced for her senior pictures in front of this window. Doesn't it look like a senior picture backdrop? If only we would've coaxed her into the famous back of hand on side of face pose it would have been perfect. 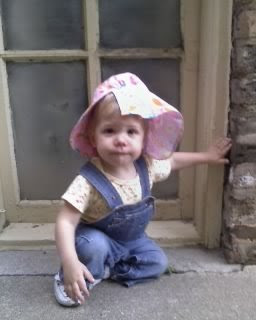 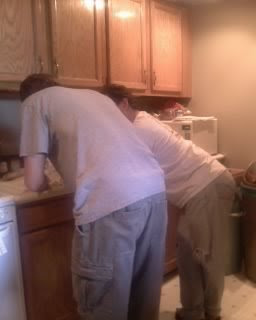 Look at those two trying to convert tablespoons to cups or something. They were huddled over the cook book like that for about 30 minutes. Eventually they figured it out and went on to make the best hot wings on the grill of all time! (hot wings not pictured)

Also, it's been a stressful week at work and yesterday I took a break (for once) around 2:00 and went to the park across the street. It smelled like flowers and had a fountain. Jason can attest that that is a magical combo for me. I am going to go every day now. well until they shut off the fountain. 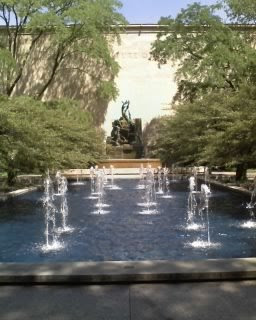 Posted by Crescent at 9:36 AM No comments:

Ouch! That's my artery you're clogging!

Jeeze, Jason. Next time you buy steaks for dinner at your boss's's's's's house could you not be so stingy and get the large size? 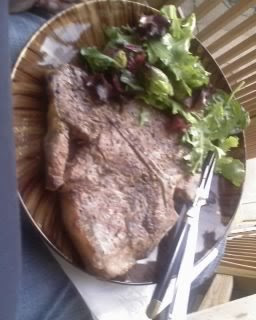 All sarcasm aside, that was one amazing steak.

Posted by Crescent at 2:48 PM No comments:

My Weekend Was A Zoo....hardy har.

Saturday - Jason and I volunteered at Chicago Cares Serve-a-Thon. It was so much fun. We worked on a mosaic (the letter "e"....it was a part of the school's name). We helped paint the USA map on the playground and we even dusted and sorted a room in the library. Then we were bused back to Grant Park for the after party which was a blast.

the e in progress. 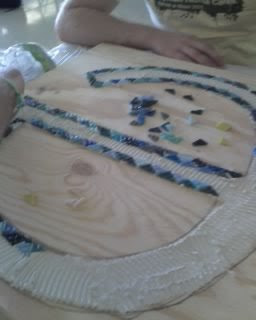 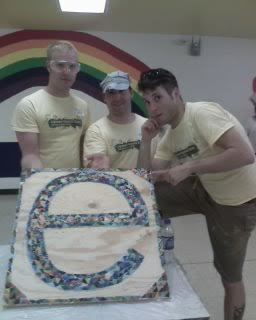 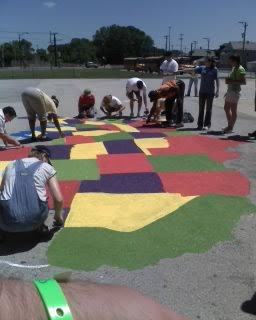 LOOK OUT! They've gone crazy with caring! (private jokes.....not to be confused with jokes about privates.) 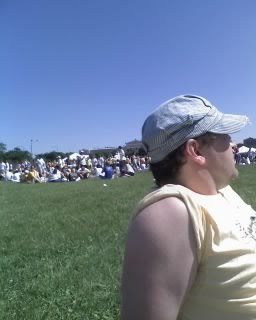 Sunday - Jason, Fred and I went to the zoo. Highlights: a cougar wanted to eat this one baby. We rode the carousel. Talked to some ducks. 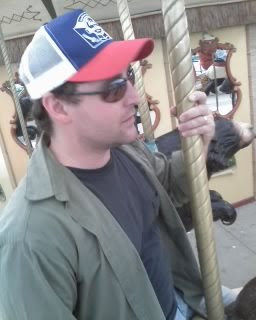 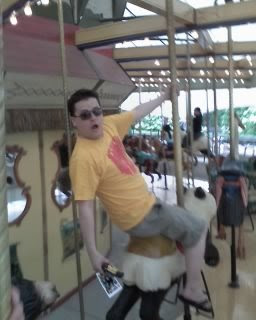 Then I had off yesterday and spent most of it hanging out with Calaban watching movies. It would've been more fun if he would've just found SOME way to get comfortable and relax a little. That cat has some major stress issues. (PS - he slept like that for a solid hour without moving) 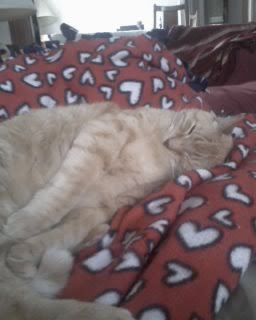 Posted by Crescent at 1:14 PM No comments: 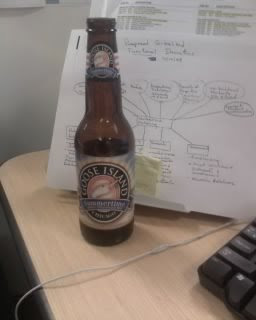 Posted by Crescent at 3:57 PM No comments:

Lunch at the Library 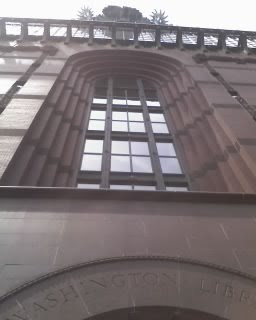 I finally ventured into the Harold Washington Library yesterday over lunch. It is large. LARGE! I got lost a couple of times but finally found my way to the 7th floor and they had both the Tom Perrotta novels I've been looking for. It ruled.

Being in there made me so homesick for my mom though. She is the queen of the library. Any library. She took me every Saturday when I was little. We knew all the librarians and would spend HOURS there. I have a vivid memory of listening to a tape of short ghost stories at a table in the children's section during thunderstorms. It was my favorite thing to do. That and there was one stone structure in a stairwell that I used to either sit on or lean against. I can't remember which, but it was always cool and I loved it.

A fireman looked up my mom's skirt at a library when she was younger so the first thing she always tells me when I go to a new one is "Look out for perverts." Then she tells me the fireman story again. It kills me every time. I always wonder how she knew he was a fireman but I always forget to ask.
Posted by Crescent at 10:24 AM No comments:

Jason's latest half awake morning conversation with me.

(I walk into room to put on shoes and perfume like I do every single day. Jason JUMPS straight up and gasps with fear)

Crescent: Jason! It's just me!

Jason: Whoa. Dude. I thought you were Kobra Kai. I had him wrapped around my arm and was trying to karate chop him off.

Crescent: Nope. It's just me honey, you are safe.

Crescent: I dreamt an entire novel about these older women looking for love at their condo swimming pool and the main lady finally did with a french guy who said he was thirteen but was obviously in his 60's.

Crescent: Yeah and OH! I dreamed we were taking care of a little gray puppy and he was so sweet but too scared to tell us that he needed to go out and no one had taken him out in days so he peed on his leash.

Jason: Nope! If he does that again you tell him we'll have to send him on the ROAD!

So apparently we can't keep dream puppy after all.
Posted by Crescent at 2:04 PM 1 comment: 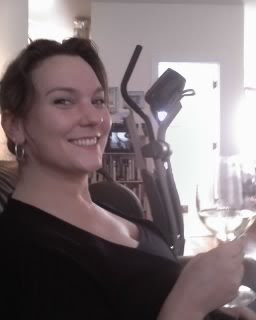 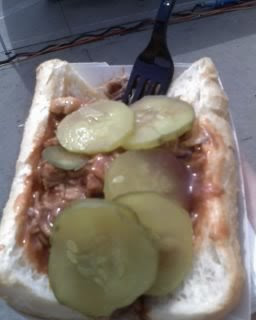 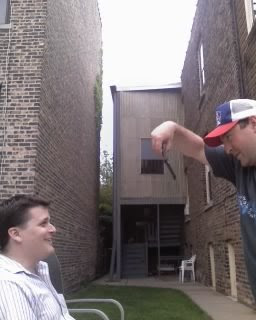 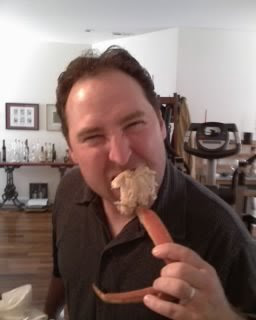 Posted by Crescent at 1:28 PM No comments:

Look who I met this weekend.... 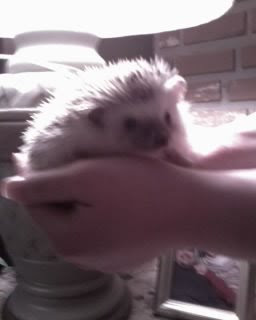 It's Chester the hedgehog! He hissed a lot but had the cutest nose I've ever seen.
That's all I got today because I'm heading out early. I also feel like I have some turkey stuck in my throat so hopefully I won't have to give myself the maneuver on the train.
Have an exciting and fun Monday. right.