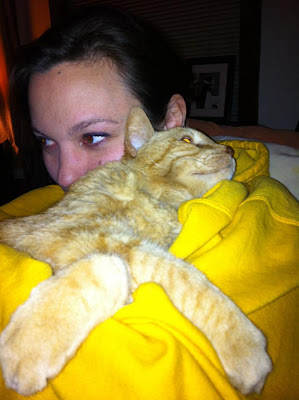 I woke up Sunday morning around 7:30 to find Caliban (our 18 year old orange Tabby) unable to walk. It was horrible. He was, literally, scooting himself around in circles trying to get up. When he would finally get up he'd fall back over, unable to put any weight on his back right foot. I handled it in my normal, level headed way by bursting into tears and waking Jason up by saying "Something is horribly wrong!". Smooth Operator was my code name when I was in Top Gun.


We rushed him to the Vet ER (also known as the saddest, most depressing, soul crushing place on earth). They got him right in for x-rays while we waited in the lobby trying to prepare ourselves for the decisions ahead, all while attempting not to make eye contact with all the sick and injured dogs sadly limping around.


The vet brought us back to see the x-ray and said there was a mass around his ankle that could be cancer but could also just be arthritis. She said “Hey cats can live without a leg!”. Needless to say we are not going to put our 18 year old cat through amputation. Basically we were sent home with crazy powerful pain meds and the advice of “He might get better or you might need to start planning for more tests or saying good-bye”. Horrible. She was a wonderful vet though. That really was the only advice to give. So we got him home and doped up. The meds were supposed to make him sleep but they seemed to keep him up and crazy. He kept staring at the candle on the table and then at me. We put on some Bob Dylan and let him ride it out. “It’s all about the journey man. Live the experience, dude.”


Our friends came over to entertain and distract us. We still cried a lot. We talked about who Caliban was to us and how we loved him in a profound way. How Jason had found him, with his brother, at a vet in Branson when they were tiny kittens. How he and Trinculo (his brother) would terrorize us by running around the apartment pooping in all our potted plants. The funny and wonderful history of this animal that has lived with us since we were in college. 18 years. That’s a long time.


That leads me to one of the few unexplainable by science events in my life. (including but not limited to the time in high school I thought I got a phone call from future me. Although I was pretty dramatic back then. It was probably my sister harassing me since we have the same voice. hmm I think I just solved that mystery.)


Right around the time that we were waiting to see if my cancer had spread and what the course of treatment/surgery would be I was home alone with Caliban on my lap. I was terrified and crying and petting him. His face was, as usual, all up in my grill rubbing against my left ear while I bawled my head off. At this time he was starting to get skinny, his fur was matted and dry and his eyes were always squinty and sore looking. He was showing signs of kidney failure and didn’t seem long for the world. We knew he was probably going to have to be put down sooner than later but couldn’t have that conversation while also waiting for test results to find out if my cancer was in my bones. Slightly bigger fish to fry and all that.


Anyway, that night I was alone and therefore didn’t care that I was about to have a very poignant conversation, aloud, with my cat. I took his head in my hands and said, “Mr. Monster (his nickname)…if you can just hold on one more year and help us through this you can let go. But please not yet. It will break our already weak hearts. I know it’s a lot to ask but we just aren’t ready for you to go.”


I felt totally selfish asking this of a rickety old cat that had moved with us a total of seven times including two in a Nissan Sentra to and from Branson without air-conditioning with two other howling cats. A cat that lost his brother far too young. A cat that never complained when we were so poor we had to eat donuts for a week while he got generic brand cat chow probably made from cardboard. A cat that sat on my lap and let me sob out a request to hang in there a little longer so I could get through cancer a little easier.


A few days later Jason and I were hanging out trying to keep it together when Jason confessed to me that he had asked Cal to try and hang in there a little longer for us the previous night. When I started crying and said I’d had the same conversation we both laughed through tears about how alike we are but also what an awesome a cat he was.


Now you can choose to believe or not believe but I promise you this is the truth.


Within a few weeks I noticed him eating more. His fur started to fluff back up to its normal soft, just out of the salon condition. His eye cleared up. He started playing with yellow fish (his favorite toy) again. By the time my surgery rolled around he was starting to get a belly on him again. While I recovered he spent every waking moment on my lap but always so careful not to sit on my lumpectomy area. Like he knew I was hurt.


When chemo rolled around he looked about five years younger and has stayed that way since. Every night when I’d wake up with joint pain and fevers he would groggily wake up from his chair and meander over to me as I got settled on the sofa for a night of misery and never leave my side. He would find the times Jason needed him too. I have a picture of them together one day and it almost looks like Caliban is the one holding Jason instead of the other way around.

Sunday was the first time since our talks with him that we thought maybe he was a goner again and I’m happy to say that little curmudgeon is walking just fine as of last night. He’s off the pain meds (although I’m sure he’ll never forget the night he could hear rainbows and cosmically understand ice cubes). Heart of a champion!


He ended up giving us way more than one year since that talk and apparently is still hanging in there, generous old man that he is.


Last night when I got home he jumped up on my lap even though I tried to stop him to keep him from re-injuring his ankle. He was doing the intense face on my left ear rubbing thing and I stopped him and grabbed his face again, looked him right in the cloudy old eyes and said “thank you buddy.”