I've been having some great ideas lately. I can't share them all here lest you steal them and make them your own. (Matt, I'm looking at you....j/k....see you at dinner)

I will say this. One involves a placemat that looks modern and elegant but also contains a fun game for the whole table to enjoy. There is a kids version too. It will make me rich, RICH I tells ya!

I've said too much.

Here is another great idea that a genius friend of mine came up with that I think could possibly revolutionize the coffee world. Check it out and if you dig it then sign up and digg it....dig? The site itself is yet another great idea so you won't regret it.

Check it: http://digg.com/gadgets/Roast_Coffee_At_Home_with_a_Popcorn_Popper
Posted by Crescent at 1:29 PM No comments: 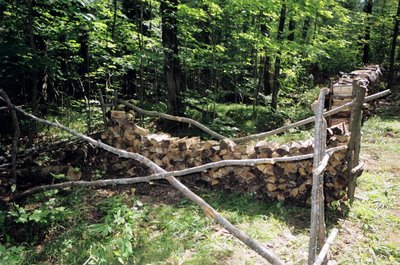 So the one in front is the wood crib that Jason and I built to hold the logs we split while at his parents. It was easy but I kept cutting my arms on the wires we used to hold them together.

After we were done that day I went inside and checked my email while Jason got cleaned up. I wrote to everyone in my dept. and told them of the wood crib. Chris, one of my very good buddies here wrote back and said, "A wood crib! Who are you planning to put in it? Is there something we should know?"

Well of course he was thinking I meant a baby crib but I misunderstood his email and thought he was making a dead bodies in the woods joke which seemed really dark and out of character for him, but it cracked me up. Like we had to build a wood crib cuz we gone and kilt somebody! It's so creeptown.

When I got back to work I gave him some kudos for the dark joke and he, of course, had no clue what I was talking about. When I explained it he just stared at me and finally said, "So...are you pregnant or not."
Posted by Crescent at 5:00 PM No comments: 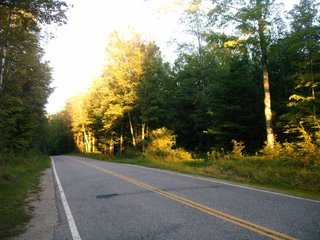 I don't really have a ton of time with my new and exciting job duties (some of which include writing! Kick it!!) BUT I want to make sure to get something on here.

I will say that our trip was wonderful. I never had to watch anything die and caught one fish that ate my yellow spinner (not a euphemism for anything) and swam away. My in laws took such good care of us and took us out on the water or hiking to water falls or something fun and new every day.

The time with Jason was, as always, wonderful. The trip up in our super cool PT Cruiser we rented, the time there, the trip home, after getting home....I never get sick of him, I swear. He'll steam my clams at times (a euphemism) but only in that trying to suppress my laughter way that I secretly love. Watching how people interact with their families is the most telling thing ever. He is helpful and sweet to his mom and dad in such a sincere way. Blah blah blah...Jason this and Jason that. He's truly just wonderful company and a stand up cat, but don't tell him I said that, it'll go straight to his head.

SO~ (buttons) here is the important list of animals I saw UP CLOSE while on my trip.

I hope I haven't forgotten any. I was really hoping to see a bear but no dice. My mother in law called me two days ago and left a message saying a bear had just walked through their front yard! Dang it! I can't believe I missed that.

Tomorrow I will show you pics of the wood we split.