A Key, A Star, A Leaf and A Feather 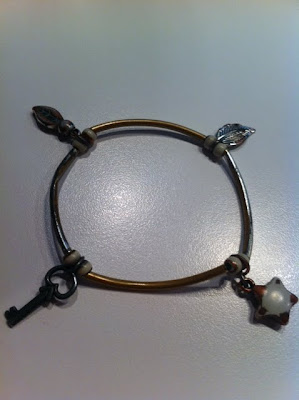 This is the only superstition I've allowed myself during my cancer run. My, then, 17 year old nephew gave me this bracelet when he came to visit me the week before my lumpectomy. He did NOT want to hear or talk about the cancer. It made him visibly sick and worried. But he showed up with this in a little gift bag with a candle and it spoke volumes. He said it was "a house warming gift" but I'd lived in that apartment for about five years at the time.

I wore it to every test, surgery, lab, x-ray, mammo, chemo and radiation treatment. It used to be all silver and the feather was blue and the star was white but it's all rubbed off. I like it that way. Shows the wear and tear of the journey.

I have another mammogram today and I almost forgot it on my bed room door knob (where it lives when I'm doing dishes). Thankfully I could feel it missing from my wrist and went back for it.

I'm always nervous on these days. Especially when the weather reminds me of that first mammo where they found the mass. It's like ghost stories where they say "it was a night JUST like this" then large Marge scares the shit out Pee Wee.
Posted by Crescent at 1:06 PM 2 comments:

Last night in writing class we all were handed pictures of an object and had to try to describe them to the rest of the class without telling too much. Kind of like Taboo. For example if you had a picture of a fire hydrant you couldn’t say what it’s used for or something LIKE it…had to be purely physical description.

First off the teams were uneven so I ended up getting my own picture and not being on a team so I had to describe it by myself. So it was a little daunting from jump street.

It was just a real nice run of the mill human skull. I had some good clues...three black holes (which I at first called “three black circles” and then remembered that a nose hole is not at ALL a circle), moving parts, smooth, white-ish grey…etc.

Keep in mind I was the only one that didn’t guess the previous items correctly ( hanger and fire hydrant) because as people starting using dimensions and circumfrences and hypotonus's's and angles and stuff my brain went into math fear protection mode and cranked up the groovy sounds of a Rita Coolidge song I had listened to right before class to drown out the scary words.
Enjoy it while you read the rest of the story if you like. It's very soothing.

When I came to it was my turn to guess. For the hydrant I guessed “silo.”
For the hanger I guessed “some sort of playground equipment? or a fence?”. So it wasn’t going well for me. I leaned over and whispered to my teacher that I wasn’t very good at understanding left brain thinking sometimes. My teacher said that was just fine and not what the exercise was about so not to worry. He’s a super great guy and teacher, and yet I swear I could still feel that he was suppressing a giggle fit.

Back to the skull. No one had any clue what my picture was (except for me and the teach, of course) so he started trying to help me describe it to the class. He asked me if everyone in the room owned one of these. I said “I....think so? Wait. Oh...Yes. Yes. Everyone owns one.” The teacher and I both started sort of giggling over that answer and my face turned the color of a fire hydrant (or silo). I was laughing out of embarrassment but I suspect he was probably wondering how I was able to hold down a job, speak a human language and feed myself.

When everyone scratched their heads (that everyone in class owned) and still didn't get it, he asked what size the item was.

I replied, “About the size of a basketball”. He totally started losing it, but tried to keep his cool. I realized I may have overshot and said “a small basketball...a small one.”

Finally, after everyone was SURE it was a bowling ball I revealed the picture.

Now I’m sure it didn’t happen this way but it FELT like the entire class in unison said “The size of a BASKETBALL???!”

Then I got the kind of giggles that make my eyes water and tried to hold them in. Mercy showed herself and the class ended and I practically jogged home.

The only thing I can say is thank GOD Jason wasn’t there to break in with one of his “well Crescent does have an abnormally giant head” jokes. He probably sensed it all the way downtown at his job and doubled over with a splitting headache and vomited on the floor. His body and mind fighting through the loss of missing a "My wife's head is SO big......" opportunity.
Posted by Crescent at 10:16 AM 2 comments:

Please don’t have hurt feelings by what I’m about to say. It’s just one whoa man’s opinion. I want to punch that new Sarah Jessica Parker movie in the face. With my fist. And possibly also kick it with my foot. Or maybe even kangaroo that shiz with both feet. What’s it called again? How Can It Be That She Does Many Things?? Or What The Shit? She Has a Family and A Job?!!! Now I’ve Seen EVERYthing! or Bow Down to This Rich White Lady That Makes Much Money Doing Something She Loves and Is Married to Greg Kinnear and Had Babies?

I can’t be bothered to look it up. Whatever it’s called I want to throttle it. She is the ONLY one that manages this life, everyone. Don’t mind the moms that have more than 2.5 kids, a couple of manual labor jobs that pay crap, at least one mortgage and dear lord still manage to be sweet humans that function normally in society without falling on beds sobbing in their Prada dresses. OR how about the dads that work their butts off and manage to still make time for and love their children and wife!??? UNHEARD OF!

I will never watch this movie but let me ESP five things that will happen:

1. A seedy boss will put the moves on her 9 to 5 style but without the charm of that little gem of a film. In fact I think Dabney Coleman is actually IN this movie too! For shame Dab, for shame. You are better than that, sir.

2. All the kids will be totally ill mannered little spoiled jerks but it will be okay because they are just “acting out” because mom is trying to have it all and sometimes forgets to feed them steaks and shrimp while buying them tickets to the teen pop star, Jordan Buster concert (they won’t pay for the rights to use Justin Beiber’s name, cheapskates).

3. Also, hold the phone….doesn’t Greg Kinnear’s character have a job too? Even if he’s stay home dad that’s a pretty intense job as well! Why isn’t it called How Do THEY Do It? Huh? Okay that wasn’t a prediction. I just got mad again.

4. Cupcakes will be mentioned or baked or eaten with zeal.

5. A hotter and younger girl will threaten SJP at work. Not like with a knife or gun, I mean with her youth and energy and fat free gams.

6. Bonus: Pilates will be mentioned or shown. Those obese fatties in the cast better WURK to lose that .2 ounce of fat they have on their skeletons.

While we are at it…how do I do it? I mean come on! Full time job pulling in five figures, an 18 year old (cat) still living at home who pees on the floor sometimes, a really full DVR, noodles that aren’t going to Marge themselves and a husband who rules. How do I do it, you guys? I don’t know and neither do you, but SJP has it the hardest so don’t even bother trying to solve this mystery of the ages.

Editor’s Note: Dabney Coleman isn’t in this movie thank God. I had to look it up if I wanted to get a mere WINK of sleep tonight.
Posted by Crescent at 12:10 PM 3 comments: