For some unknown reason I woke up today and instantly had a giant panic attack. I haven't had one in ages AND am not really feeling anxious about anything! I mean I always have a low level of panic about things like money, health, if we have enough noodles in the house..but this was outlandish. I felt like I was going to spin off my axis into the abyss and could NOT get myself talked down. I was so frustrated because I feel like panic like that is, obviously, all in head therefore easily stopped by using my adult brain. It just doesn't work that way, unfortunately. I never really bought into the whole anxiety overtaking your body and turning you, however briefly, into a sweaty, rapid breathing doom machine until I had one. I pretty much lived in one the year my mom had cancer. All my trust in the universe was out the window along with my ability to get through even an hour without becoming convinced to my core that every single person I loved was going to die that very day. Or I was going to. Or we all were going to. It was super fun.

I started taking Xanax twice a day but it just sort of turned me into a muted version of myself and didn't really relieve anything. It felt like it just chloroformed ragged the anxiety's face when they least expected it but it was fine when it woke up. Like Goldie Hawn in Foul Play. I feel like she gets the chloroformed like five times in that movie and she always wakes up perky and ready to karate chop.

Anyway, eventually it got so bad that I had to cry for the entirety of my Dad's 70th birthday party which really added a nice touch to the festivities my family had worked so hard on. After a very intense and needed talk with my sister (who is a therapist but also just a wonderful person and listener) I decided to stop taking Xanax and see a psychiatrist. She helped me find ways and times to meditate and changed my life.

However, those didn't work this morning. You know what did work? 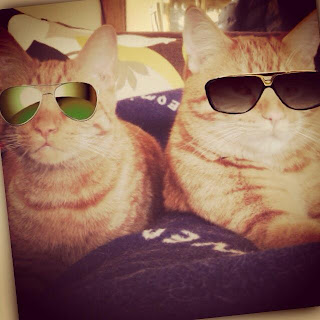 Usually in the morning they are insane. Yes yes...I know you are saying "well that's just how kittens are....I get it." No. You don't. They aren't normal insane they are like how a really bad actor plays insane in a really bad movie. Darty eyes....prone to violence against each other and toys...manic eating binges followed by tag team pooping and litter kicking. Point being, cuddling with me is very low on their To Do list at that time of day. Sun comes up they go batshit.

But today I came out and tried to calm down on the sofa by watching the sunrise and they both stared at me like they KNEW something was wrong and got up on my lap. After both of them marched on my stomach for about five minutes they BOTH curled up on my lap/chest and reached their paws out on my arm in a very human "there there" way. Then they fell asleep purring like crazy. And that did it. I felt the worry wash out of my blood stream and we all were able to sleep like that for an hour, all of us holding paws. It was a really sweet and bonding moment with them.

I know they are just cats and probably just wanted to take a nap because they played too much stuffed mouse throw in the night but whatever. It worked.

I still have that foggy drained feeling that you get after one of those sessions but thank God and feline it's over.

Posted by Crescent at 9:45 AM No comments: