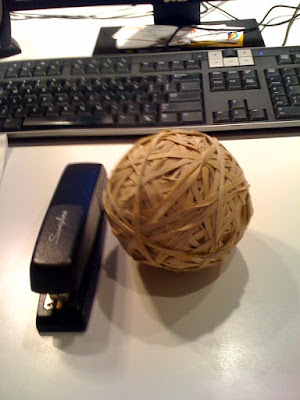 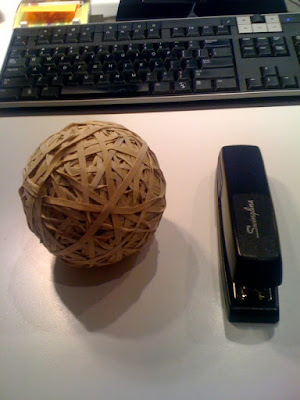 Man...it looks about the same but I've been adding bands daily!

In other news...last three bag treatment on Tuesday! I'm excited-ish. I'll be way more excited once it's over and I'm on the recovery end of it but I really am feeling the light.

I'm going to spray tan and grow my hair down to my B.

Happy weekend, kittens!!!
Posted by Crescent at 4:25 PM No comments:

And Where Is The Body?

I realized last night that I don't know my body right now and feel invaded and that THAT is the worst part. People ask that a lot..."what's the worst part?" I'd say watching my family and friends be scared is THE worst but the invasion of the crescent-snatchers is a close second. However, it felt fantastic to understand that all of a sudden. It happened while I was holding Anne's new baby, Eden, and just couldn't control my tears and heartaches. It got worse when Jason came into the room. I felt like an animal...like my instincts were just going along without me. I felt my insides shake and my nearly lashless eyes started doing that tear squirting thing (PS - don't take eyelashes for granted...they really help when crying). I went into the bathroom and that's when it hit me. I don't look like myself, I don't FEEL like myself, I'm not dressing like myself....hell I don't even SMELL like myself. I hate that part. Because of that I am abnormally raw and crazy all the time, I think. It works the other way too where I'll laugh so hard at something people start looking at me like I might need a blanket and some soup. I used to have SOME control over my emotions but nope...not right now. Oh well. There are worse things, for sure. It's like everything is too joyous or too sad and they create this mix of crazy that just flows out of me no matter what the context.

It almost just happened again during a free chair massage at work.

First off, let me say that I should be getting massages weekly. Holy TOLEDO OHIO did that help. I know I know...they give free ones at Thousand Waves Spa for cancer patients. I don't know why I haven't gone yet, I just haven't.

Anyway, when I plan to tell someone something I always end up doing this super fast awkward talking and nervous bad joke laughing thing when the time comes to actually say it. This is not a side effect of cancer or chemo. I have done this my whole life. So I had spent all day trying to remember and plan to tell this massage person that I have a wig on so they don't rub my head too much or feel weird or whatever. No big deal to tell someone, right? Well this is what I ended up saying.....and I quote......

"HI!! (said super loudly) Not that I'm uncomfortable or that YOU would be but this is a wig (point to head)....from chemo...I get chemo...for cancer...but I'm fine really so don't feel bad.....so this is a wig (point to head again). Just so you don't like get...well up in the hairline (do an up in the hairline pantomime) or something and like....POP it off because THAT..hahahhahaha THAT would be funny and embarrassing...hahahahahahah
her reply: "ok"

She starts the massage and I instantly feel like I'm going to start sobbing bawling again! It's gotta be my hormones mostly, right? I mean they are for sure being horribly toyed with. I'm not even down! I swear! I'm pretty normal feeling and happy but man this crying out of nowhere has to stop. It makes people sad and I'M not even sad! Just ready to be myself again physically I think.

Good news is I did NOT cry afterall. I worked through it and really really enjoyed the massage. I considered going back in with a fake moustache and hat on and saying "Exuse me madame...is zees ze place for ze free massage? Sign moi up!" but I had work to do and left my french disguise at home.

Humans are meant to have their poor sore muscles healed like that. We should all have free chair massages at least once a week. Maybe no more than that because they would lose their specialness, but let's make this happen. Put it in the new health care bill, Gobama!!!

PS - the irony that crying on stage was almost impossible for me when I was acting is not lost on me. Maybe I should start acting again. I would be the cryingist actress to grace the stage.
Posted by Crescent at 3:44 PM 5 comments: 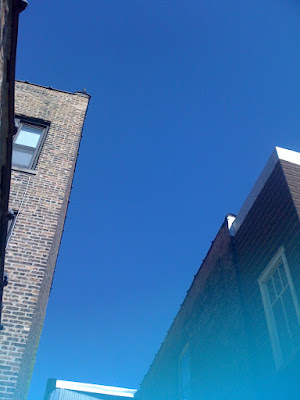 I was trying to fall asleep last night in bed, before Jason came in and I smelled like fire pit so I pretended that we lived on a lake. The cars were waves, the people talking on the street were actually night swimming on floating docks out in the water and the screen door opening and closing was Jason cleaning up the yard for the night. He was actually cleaning up the yard but in my mind it was a different yard that went right up to the water. I've done that my whole life. My mom said that some of my first words were "play like....". "Play like you are Danny Zucko and I'm Sandy." "Play like I'm kicking really high." "Play like this truck bed is my apartment." I'm always in a movie or a video or a book or living a different life but with the same people and maybe Paul Rudd thrown in for good measure. I think everyone does, right? It softens the sharp edges of life, at least for me. BUT, last night, it made me really sad and scared! I started feeling like I was going to cry about it! I was flooded with the passage of time and how much has changed around me and what is in store whether we want it to be or not...just LIFE man. The GIANT HEAVY gravity and reality and change and circles and intensity in ten cities that is LIFE! It snuck up on me. Keep in mind I have been doing GREAT! I swear they forgot to give me chemo drugs this round. It has been NEARLY a breeze. But still...I felt heartsick for some reason and pretending to be in my lake house and having no need for a job and no struggles was making it worse. So I got up and brought my pillow to special bed in the living room and said "J, I might stay out here with you for a little bit while I fall asleep if that's okay." and he simply said "I'm glad.", and we both fell asleep to the hockey game (Go Hawks!!!!) and I wasn't sad or scared at all.

That did it. My Jason. My lake, my screen door, my special bed with lots of pillows, my purring old cat next to me. Not only do I have what I need, but I have what I really want and what I've always wanted. Edges softened by reality? That's a new one.

What a joy to keep learning and pushing through. Not just with cancer because, let's face it, I'm doing super awesomely fantastic at that, but the everything else that goes on with or without you. It can emotionally cripple you for life or it can slap you square in the face then buy you the best noodle dinner money can buy, if you let it. The journey keeps talking and talking and sometimes what it says makes my blood run cold, but I'm finding if you stick it out and face it all, little by little you are rewarded with some peace. I don't know how or why that makes sense to me, but it does and I'm glad.
Posted by Crescent at 10:03 AM 8 comments:

I'm doing okay! I had a couple rough nights with nausea and then some other stuff that's gross, but I feel like I can at least make it through this crazy busy day at work. Then the weekend. Ahhhhhh

I wish I had cooler stuff to say but just am almost crazy giddy about the fact that I'm not as down and out as last round. That might change but I'll take the good while I can get it! 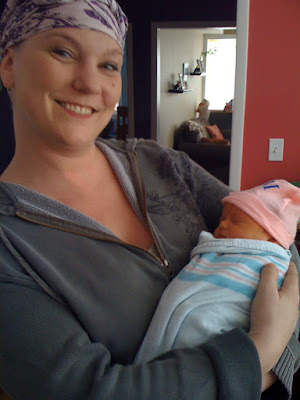 That's what our best friend's little girl said when we came to meet her fresh born little sister...."Come and see something newborn!". Amen, sister, amen.

That baby was just what the doctor ordered. When Jason held her for the first time he got tears and said "this is the first really good thing to happen all year." We are just so fortunate that Anne and Matt share their family with us so readily. It really does mean the world to us.

Speaking of newborn, I'm working on some new meditation techniques and attitude adjustments. My meditations are designed to keep me from worry, because I tells ya that is the worst feeling. I hate worrying but I do it so often. Not just about the big C but about everyone and everything. So I'm working on breathing that away, when I can. Enjoying the moment, cliche' cliche, blah blah, but it's a true cliche' so there.

I am also working VERY hard on not going into my next treatment with dread in my heart and head. I think that just preps my bod for pain and sickness. Don't get me wrong.....I'm 99% sure I'm in for it with these last two treatments physically, but I'm going to try and win in the mental department this time. Focus on how far I've come, remember it won't last forever, embrace the time to rest when I have it....etc.

This is what is new with me and it feels pretty lovely as far as personal paths to peace go. Now I show pictures!!!! (said in my roid rage voice because it makes me laugh...but it's not for me to say how hilarious my funny voices are)


Here are some of my favorite people ever on Easter. Shout out to Megan the red head for gold star work in the friend department as well. She helps me feel normal and makes sure I laugh hysterically at least twice a week. 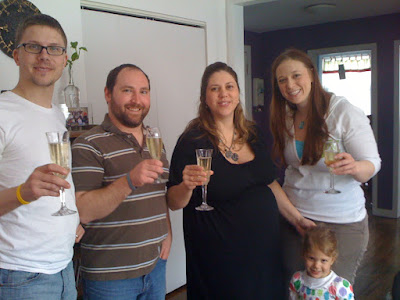 Here is Jason taking a nap in Elizabeth's new bed. She tucked him in and said "There ya go buddy!" 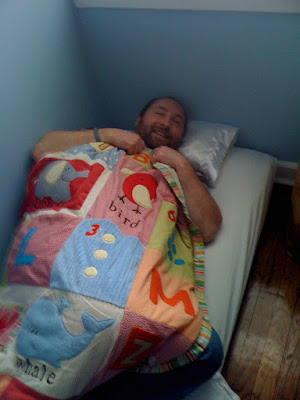 Posted by Crescent at 3:14 PM No comments: